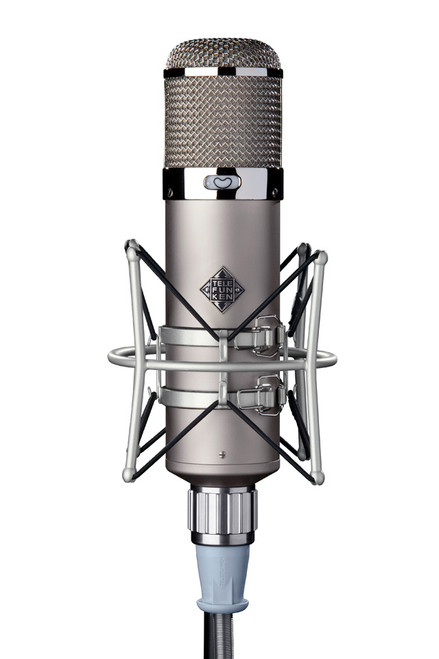 Lead time is 8-10 months, get in touch to preorder

Every great singer deserves an amazing microphone, and for more than 60 years the Telefunken U47 has been that microphone. Its authoritative mid-range and extended low-end response have made the TELEFUNKEN U47 the "go to" standard for any serious recording studio.

Upon first glance of the new U47 from TELEFUNKEN Elektroakustik, it's easy to see the "family resemblance." The large, chrome head grille houses a newly manufactured M7 capsule. Its matte nickel finished body houses a new BV8 output transformer and a newly developed VF14k vacuum tube; a "plug and play" replacement for the rare VF14M tubes found in the original. The classic "TELEFUNKEN" diamond logo proudly adorns the front of the body tube. All of these accoutrements show that this microphone means business.

Since its original development in 1946, the TELEFUNKEN U47 has been the microphone of choice for generations of recording professionals. The first condenser microphone to offer selectable polar patterns (cardioid and omnidirectional), the original U47 also featured the famous M7 capsule which had been developed in 1928 by Georg Neumann. To this capsule was added an amplifier built from military surplus VF14 tubes (they had been used in field and aircraft radios), and BV8 output transformers. The combination of these components created a sonic quality that was absolutely unheard of in the English speaking world of the mid-1940s when darker sounding, less detailed ribbon microphones were the standard. The introduction of the U47 brought a new level of fidelity to the audio world, and is still considered to be one of the finest microphones ever produced.

Whether you're recording a symphony, a "crooner," or any facet of modern music, you'll find a great tool in the U47. Its authoritative mid-range and extended low-end response dance from your ears . . . much as a vintage wine dances from the palate. Everything, from vocals to the loudest of guitar sounds, full on orchestral recording, beautiful backing vocal arrangements, or a chamber ensemble will benefit wildly from the rich and vibrant tone of this stunning microphone.

Order the Telefunken U47 today lead time is 8 months