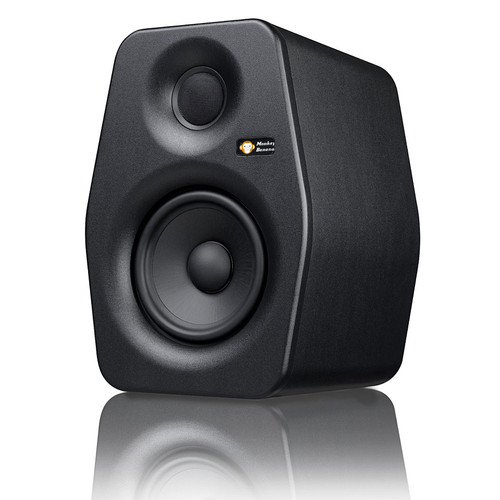 The Monkey Banana Turbo 5 in black is an active, nearfield monitor with a 5 inch bass woofer and a 1 inch silk-domed tweeter.

Featuring both analogue and digital connections, which is handy if you are short on analogue outs or want to bypass your soundcard to use the converters that have been built into the monitors. The Turbo 5 also has high and low controls for dialling in better response to your monitoring environment, allowing you to back off the bottom end if the room is bassy – a common problem in small home studios.

The Monkey Banana Turbo 5 employs some pretty serious engineering, which can be seen in its sleek, and distinctive shaped cabinet. This hexagonal shape minimizes standing waves within the cabinet which can lead to distorting and colouring of the audio. The rigid MDF material also helps to minimise distortion of the low frequency driver.

The connections on the Turbo 5 include balanced line via XLR and Jack as well as an unbalanced RCA for connecting to older mixers or HI-FI equipment. The 5 inch woofer extends down to 55Hz and the silk dome tweeter extends to 30 kHz, giving you an accurate representation of the top end without any sloping near the 20 kHz hearing threshold.

The main features of the Monkey Banana Turbo 5 include:

PRICE IS FOR ONE MONITOR