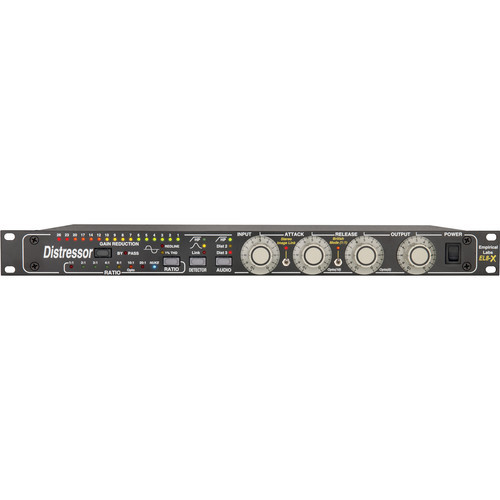 The Distressor EL8X from Empirical Labs is a professional compressor that features a wide range of controls and feature set for studio or live applications. The Distressor offers a warm, vintage sound by using a custom designed gain control circuit. All eight of the Distressor's curves are distinctive, from the 1:1 mode that simply warms up signal with low order harmonics without intentional compression, to the Nuke setting, a brick wall limiting curve that shines on live drum room mics. Some curves have different circuitry, and are effectively different compressors. The 10:1 Opto ratio uses separate detector circuitry to emulate the oldest light controlled devices, such as the LA-2A.

The Distressor features three modes that color the signal, even without compression. These extended audio modes were designed to allow emulation of some very old vintage compressors and limiters, and let the Distressor deliver a classic knee sound all its own by providing user programmable, warm harmonic distortion. In addition to the basic distortion mode, Distort 2 emphasizes tube-like 2nd order harmonics, while in the Distort 3 setting the distortion becomes dominated by 3rd harmonics more closely resembling tape. Two HP filters, with one in the audio path, one in the detector path, are also available to help with low frequencies that can cause pumping and breathing.

British Mode delivers a very aggressive sound that has some elements of the unit's 20:1 ratio, but with an unusual knee and new envelope shape. The EL8-X has the advantage of being able to selectively apply this characteristic, not just to the British ratio (1:1), but also to any of the ratios, simply by engaging the dedicated British Mode switch.

The original Distressor stereo link function used a summing and phase detection method, which allowed slight stereo image shifting. Although frequently desirable for its phase correction, and its thickening on open room mics and other stereo sources, this approach can sometimes be a problem on stereo program material where the producer/engineers want to maintain absolute left/right balance at all times. With the Stereo Image Link option, the EL8-X now has three link options including the original phase link, the Image Link, and the combination of the two, phase and image linking.

From the 1:1 mode that warms up signal with low order harmonics without intentional compression, to the Nuke setting, each curve has its own personality, and release shape. The 10:1 Opto ratio uses separate circuitry to emulate the oldest light controlled devices, such as the LA-2A

They're large for easy readability and repeatable settings, and go to 10.5

XLR and 1/4" Phone Inputs and Outputs

The XLRs are fully balanced with a transformerless design (pin 2 hot, changeable by user to pin 3 hot)
All metal film and Roederstein resistors in the audio path
Stereo strappable
Available in stereo version EL8X-S for 13.539 AED